Card pool at the time of writing

It’s rather poignant, in a first-world-problems kind of way, trying to imagine the frenzy that must have been created among the user base by the arrival of The Hunt for Gollum on the scene. You only have to hear the whoop of delight from Brandon and Andrew at the start of episode six – “episode six!“- of Cardboard of the Rings, having spun their wheels on content for the preceding episodes, to know that this was a big deal.

Then you play the quest and wonder how the game made it to the next deluxe, let alone seven of them.

I exaggerate for comic effect, but not by much. It’s a quest only memorable by dint of its place in history, and I bet a large section of the user base, having defeated the quest, promptly reached for the Core Set scenarios and incorporated the cards into multiple plays of those.

To illustrate the point…before we go on, a point about illustrations. I have played the game hundreds of times, beaten 17 different quests in Normal mode and written tens of thousands of words about the Core Set scenarios. I’m sure you know that last bit having read them all, right? Yet it was only having broken out the quest cards for The Hunt for Gollum that I noticed that the artwork on xA is a desaturated version of xB. How did I go all this time without noticing this? With doziness like that, fare thee well relying on the strategies contained within this blog. But I digress…

To illustrate the point, we’ll break with the ‘tradition’ of three quest write-ups, where we start by breaking down the encounter deck, and instead start with the text of all the quest cards in one place:

2A
A New Terror Abroad
2B
Quest Points: 10
Forced: At the beginning of the quest phase, the first player looks at the top 2 cards of the encounter deck. Reveal and add 1 of those cards to the staging area, and discard the other.

3A
On The Trail
3B
Quest Points: 8
Any player who does not control a hero with at least 1 Clue objective attached cannot commit characters to this quest. If there are ever no heroes with Clue objectives attached in play, reset the quest deck to stage 2B.
If the players defeat this stage, the players have once again found a true sign of Gollum’s passing, and won the game.

The theory of the quest, searching for Clue cards in the encounter deck, is clever and is an early indication of the flexibility of Nate French’s design. But the practice of it is dull. During 1B, a two-player game is going to draw five encounter cards overall, of which two will be discarded, while in 2B four cards will be drawn overall with one discarded (NB there are five surge cards in the deck, Eastern Crows, of which more anon, and Flooding). The distinction between the two sections is one without a difference, and the flavour text doesn’t even try.

Nothing too scary on the face of it, but appearances can be deceiving for there is one nightmarish (as opposed to Nightmarish) card: Hunters from Mordor, a critter of which there are five in the encounter deck. The text is worth quoting:

Hunters from Mordor get +2 attack and +2 threat for each Clue card in play.
Shadow: Deal 1 damage to each hero with a Clue card attached. (3 damage instead if this attack is undefended.)

The kicker is ‘in play’. You can’t leave Clue(s) in the staging area to pick up at the last moment like in Escape from Dol Guldur and you don’t want to leave them in the staging area where two of them with two Clues would be an eye-watering 12 threat. These need killing, and those 6 hit points are an impediment to that. The only consolation is that the balance of probabilities is such that some of them might end up being discarded. We’re about to find out the truth of that, eh?

The temptation is to pile on the Beregond/Boromir combo, but that’s 21 threat from two heroes and we would like to keep the threat below 35 thanks to the treacheries that whiff, in whole or part, in those circumstances – Treacherous Fog and Evil Storm. With the other enemies being mostly harmless, and only eight of them in total anyway, bringing them seems like overkill. Much better to pile on the direct damage, and what better place to start than with the hardy annual that is Gandalf/Sneak Attack, so sadly missed in the previous quest.

Looking through my Tactics/Leadership heroes for someone with low threat, one leapt out – Sam Gamgee. He’d need some serious firepower alongside him to be truly effective, but knowing he can quest for 3 then spring up and contribute to dealing with any Hunters from Mordor is most reassuring. Beregond seemed a straightforward addition to this particular setup as he should be able to deal with all but the most Clued-up attack. (Direct damage from Shadow effects: 1, from Hunters From Mordor and only on those holding Clues. Boosts to attack from Shadow effects: 1, from Eastern Crows.) But, upon reflection, I decided Legolas would be a better fit. When it comes to the Hunters From Mordor, the emphasis surely has to be on attack rather than defense. Thar will be chump blockers, but we won’t be stuck with overcosted Core Set dreck with ‘Archer’ in their title.

All this means we need one more low-cost hero, of which there are few that are obvious. Of the 17 heroes left that I possess, six have a starting threat of 9 or less. In the end, I went with Thalin. I seem to recall reading somewhere that Nate French is rather fond of Thalin, which might explain the favourable ruling about when his effect – While Thalin is committed to a quest, deal 1 damage to each enemy as it is revealed by the encounter deck – is triggered, i.e. immediately. It feels a waste to be committing a Tactics hero to the quest every turn, and the long run outlook for Thalin is grim. As Wandalf the Gizzard notes in his Rings DB review in the link, he’s only useful “against enemies with 1 HP, of which there are a paltry nine out of a total of 414 [in the various quests at the time]!” This is definitely one of those quests though. Being able to discount the possibility of Eastern Crows ripping through your game multiple times with surge [Edit: you still have to shuffle Eastern Crows back into the deck] is most reassuring.

The fact that Thalin is not going to see much game time in future quests makes me more inclined to pick him this time round, a concept that I am now about to ignore when it comes to the Spirit/Lore side of the table. If we’re planning to keep threat < 35 then Glorfindel is a lock. Sure, we’ll have to anticipate him being used for questing and raising threat each time, but threat should be sufficiently low to begin with that if it starts going > 35, it won’t be the Glorfindel penalty that will have brought us to that point. There’s always Light of Valinor as well, whose chance of drawing we will maximise by the addition of Beravor as our Lore hero whose card-drawing talent will be useful for both decks. Is there ever a scenario where it wouldn’t be useful? Her 2/2/2/4 also makes her a jack-of-all-trades amidst a plethora of masters and she can be deployed to quest/defend/attack according to the circumstances. Finally there is Éowyn and her 4 to 6 willpower. It bothers me that dispensing with her talents seems so hard to put into practice, no matter how much I might wish to change things up. I have a feeling it’s a dilemma that won’t be resolved until the arrival of, well, Tactics Éowyn.

Now to populate the decks, and having invested so much energy in anticipating Hunters from Mordor it frees us up to consider another factor: locations. There are a lot of locations in comparison to, say, Journey Along the Anduin. Compounding all of this is the temptation to plonk locations in the staging area when picking one-from-three after questing successfully during 1B or when picking one-from-two before questing during 2B. Gee, River Ninglor looks a lot less traumatic than Hunters from Mordor I’ll reveal that location and discard the enemy wait there’s Treacherous Fog adding 1 more threat and I can’t clear it because The West Bank is far more threatening so I’ll put that in the active location oh great next time round I have two more locations and no cheap enemies so Legolas can take them out and put some progress on…you can fall victim to some serious location-lock in this quest so a lot of location-clearing cards makes sense. Yay, even the mostly-useless Lórien Guide. If Northern Tracker remains stubbornly-if-ironically hard to locate, we’ll be glad for that the Lórien Guide to tidy up some of those awkward 3-threat active locations. Add in a few cheap allies with chump-blocking in mind and a few luxury allies in case the resources pile up – Beorn could also be a beneficiary of Sneak Attack if Gandalf, as he is wont to to do, goes missing. Sprinkle in some damage-boosting events, attachments for same – a couple of Daggers of Westernesse on Legolas can turn the Hunters into the hunted. Finally, a garnish of the usual suspects from each sphere – Steward of Gondor, Daeron’s Runes, A Test of Will, Feint. We started off talking of dull, and we end talking of dull. Hopefully the outcome of this recipe will be a bit more stimulating for the pallet.

Oh, and Bill the Pony. 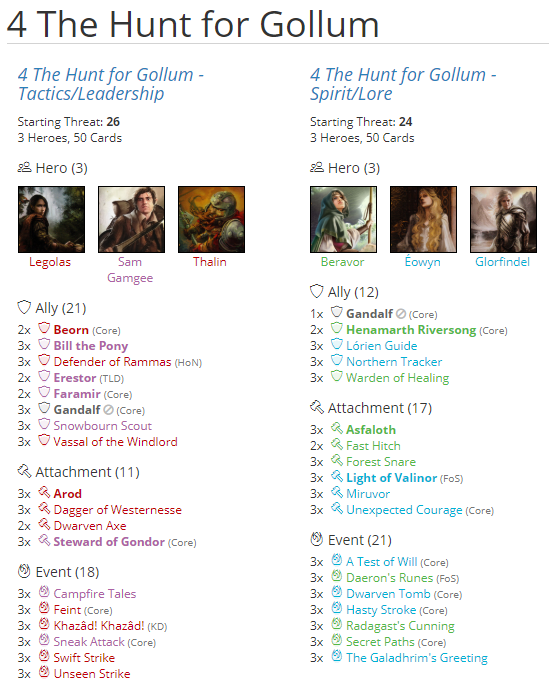 View all posts by deiseach

This site uses Akismet to reduce spam. Learn how your comment data is processed.

A blog assessing the individual quests in The Lord of the Rings: The Card Game. Spoilers abound, but they will be (mostly) below the jump in each post.